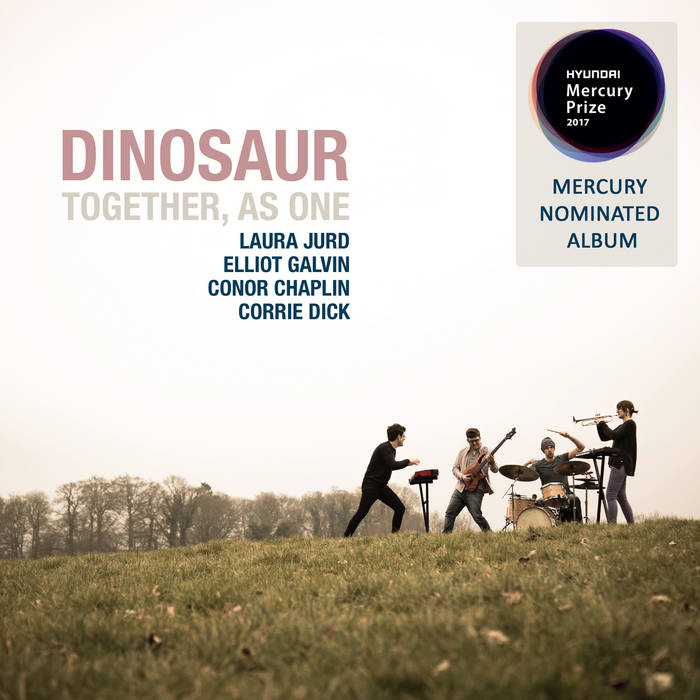 smithyhouse1 Innovative and full of character. It's a long time since I've been so enraptured by a release such as this. 4 unique talents 'Together as One'. Favorite track: Robin.

_weBma$ter A great album from the onset. The opening title, being an absolute joy to listen to with Hassell like drones and forefront tonality with a sprinkle of Davis. Magic. Favorite track: Awakening.

wing commander beggsie By far the most exciting group around. This album pushes jazz on when so many current artists seem reflective and honouring the past. Not that Dinosaur doesn't, but they infuse their sound with everything else that's going on, and end up making a jazz album that has knowledge of the past but the heartbeat of the now.
more...

'Imagine the impressionistic electric-jazz moodiness and glistening keyboard textures of Miles Davis’s In A Silent Way seamlessly wrapped around Celtic folk melodies, Django Batesian idiom-swaps, and interwoven with American, Scottish and north African drumming – and you might have a feel for this superb set from Laura Jurd' GUARDIAN ***** (Five Stars)

‘Dinosaur is a new British jazz "supergroup"’. ALL ABOUT JAZZ (UK)

‘Surely rank as one of the best debut albums for years, a remarkable fusion of thoughtful compositions, skilful musicianship and visceral energy. ALL ABOUT JAZZ (UK)

“This band are going to be huge…” JEZ NELSON, SOMETHIN’ ELSE (UK)

"...a powerful and bold album...Laura [Jurd] skilfully blends elements of folk, rock and jazz and I think she's really developed a unique style of her own..." BBC RADIO 3 CLAIRE MARTIN ("I’m a fan!")

"The elegiac closer, "Interlude" signs off what must surely rank as one of the best debut albums for years, a remarkable fusion of thoughtful compositions, skilful musicianship and visceral energy." ALL ABOUT JAZZ (UK)

“Rechristening her regular quintet Dinosaur gave fair notice of their thrilling power live, where they’re as likely to fly into souful Sly Stone or JB’s terrain. Their debut album, though, is a considered studio production, with a sense of space and shape...” JAZZWISE (UK)

“Despite it’s influences this is not a repetition of the old, as freshly and intensively as the quartet plays.” VALONKUVIA (FI)

"Most of the solo work is carried by Jurd’s inventive, expressively mobile trumpet and the general ensemble components are imaginatively arranged, all contributing to a lively and productive album of originals from this high-level British group." THE AUSTRALIAN (AUS)

‘Together, As One’ is the third album as a leader from British award-winning trumpet player, composer and band-leader Laura Jurd and her debut with newly named band Dinosaur. Featuring Laura’s regular collaborators, friends and creative cohorts Elliot Galvin, Conor Chaplin and Corrie Dick, ‘Together, As One’ is a coherently powerful and bold album that not only confirms her promise as one of the most important young musicians to emerge from the UK jazz scene in recent years but is also a statement that will launch her music into the international jazz world stratosphere.

All music written by Laura Jurd.

Featuring appearances from Kari Faux, Bluestaeb and and interview with NY-bred artist Wiki